WORLD'S MOST DANGEROUS AND BREATHTAKING ROAD

Added 3 years ago by vindheim
65 Views
Opened on July 7, 1989, the Atlantic Road is a National Tourist Route and was honoured as Norway’s Construction of the Century in 2005. The Atlantic is an 8.3 kilometer (5.2 miles) section of Country Road 64 which runs between the towns of Kristiansund and Molde.
The road is built on several small islands and skerries, which are connected by several causeways, viaducts and eight bridges.
Atlantic Ocean Road isn’t long- just over 5 miles, but this short Norwegian road has a reputation rivaling even some of the most iconic American roads such as Route 66 and the Loneliest Road.
Built in the 1980s, the road and its 8 breath-taking (and sometimes terrifying) bridges has become one of the country’s most popular tourist attractions.
The Atlantic Ocean Road connects a chain of Norwegian islands with the road seeming to hug the sea. During its construction the sea seemed to almost challenge the idea of the road invading its space, sending 12 European windstorms to deter its completion. Man, however, won out over Mother Nature and the road was opened to travelers in 1989.
Originally a toll-road, the roller-coaster-ish road has now more than paid for itself and is toll-free today with thousands of motorists and motorcyclists basking in its twists, turns, and stunning views.
Norway recognizes the road as an official “Cultural Heritage Site” and “National Tourist Route,” but its biggest honor came when the road was named the “Norwegian Construction of the Century.”

WORLD'S MOST DANGEROUS AND BREATHTAKING ROAD 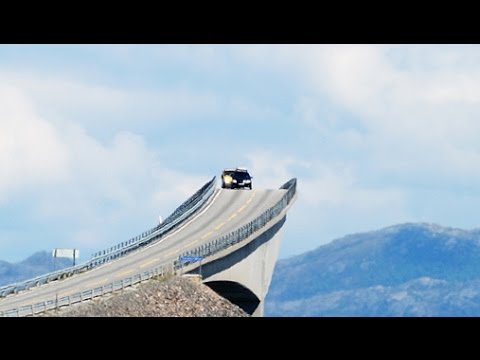 Opened on July 7, 1989, the Atlantic Road is a National Tourist Route and was honoured as Norway’s Construction of the Century in 2005. The Atlantic i...