EU keeps its shield up in the US trade war. Michel eudebates with American Chamber of Commerce

Added 1 month ago by
10 Views
Charles MICHEL, President of the European Council, meets via video conference with the Executive Council of the American Chamber of Commerce to the EU. https://www.eudebates.tv/debates/special-debates/uk-politics/brexit-barnier-worried-and-disappointed-over-eu-uk-talks/ #eudebates #debates #Barnier #BREXIT #negotiations #USA #Canada

Europe expects a change of tone with Joe Biden but trade ties could still be tense.

Europe wants to reset trade relations with incoming U.S. President Joe Biden but is not laying down arms just yet.

Indeed, the first major EU action after Biden's victory has been to slam higher tariffs on U.S. planes and agricultural goods in a long-running case involving America's subsidies for its aerospace champion Boeing.

Relations with the next U.S. administration pose a dilemma. On the one hand, Brussels is seeking to turn the page on four years of transatlantic tariff war with U.S. President Donald Trump and his "America First" strategy. On the other, however, EU officials are acutely aware that trade relations with the U.S. are likely to remain tense over topics ranging from taxing U.S. tech giants to Europe's appetite for Russian gas.

For now, top officials in Europe insist that they are cautiously preparing for a new start. They argue this week's Boeing tariffs are only retaliatory and counterbalance the tariffs the U.S. has imposed over European subsidies for Airbus. The new EU duties are supposed to create a level playing field until Washington comes back to the negotiating table to discuss a broader transatlantic détente.

Dutch Trade Minister Sigrid Kaag argued the tariffs were all about building up a strong position for this kind of de-escalation.

“I understand this might look contradictory,” she said after a virtual meeting of EU trade ministers on Monday. “But it also means that all cards are now on the table. We expect these tariffs to be revoked in the near future when we can reset the trade agenda with the U.S.”

She added she hoped for a “new momentum” in transatlantic trade relations.

EU Trade Commissioner Valdis Dombrovskis also cast the Boeing tariffs as a move that should lay the path to a peace deal. “The EU wants a positive and forward-looking transatlantic agenda,” he said when announcing the new duties. “Therefore, we call on the U.S. to agree to both sides dropping existing countermeasures with immediate effect.” He also stressed: “We are not escalating anything, we are exercising our rights as awarded by the WTO.”

German Economy Minister Peter Altmaier, who chaired Monday's meeting of trade ministers, said that over the course of discussions it had "become clear that a very broad majority of member states see the U.S. presidential election as an opportunity to realign trade relations, to resolve trade conflicts ... and to contribute to a more rule-based, multilateral, anti-protectionist global trade relationship."

Altmaier's boss, Chancellor Angela Merkel, also said Germany and Europe were ready to contribute more to the transatlantic relationship, and named free trade as one of the key topics in which the U.S. and Germany must stand together.

No easy fixes
That is all easier said than done. While Biden will doubtless strike a different tone from Trump, Europe knows that he is no fanatical free trader. He has promised to boost U.S. manufacturing and has made strengthening “Buy American” provisions a centerpiece of his economic campaign.

In a sign of the type of discussions that lie ahead for Brussels and Washington, Altmaier on Monday also warned ministers had discussed Washington's unilateral tariffs on steel and aluminum as well as Trump's threat of car tariffs, and made clear Europe's welcoming response to Biden was linked to an expectation that America would remove its tariffs on EU goods.

"With the new administration ... we are striving for a situation in which it is no longer necessary to impose special tariffs for individual product groups, because we are prepared to reach a comprehensive trade policy agreement with the U.S.," Altmaier said.

Altmaier's choice of words — particularly differentiating an agreement on how to conduct "trade policy" from a trade agreement per se — reflects how difficult EU leaders think progress on concrete trade files will be.

While some politicians on both sides of the Atlantic still dream of a revival of the transatlantic TTIP deal, such as German Defense Minister Annegret Kramp-Karrenbauer, who last month called for a transatlantic free trade area, the Biden campaign has said new trade deals are not its priority. Such a deal would also face major opposition in Europe. Both sides have over the last four years grown apart on policies such as taxing digital giants, setting privacy limits to data transfers, phasing out pesticides, subsidizing "green deal" champions such as battery makers and imposing a border levy on carbon.

EU keeps its shield up in the US trade war. Michel eudebates with American Chamber of Commerce 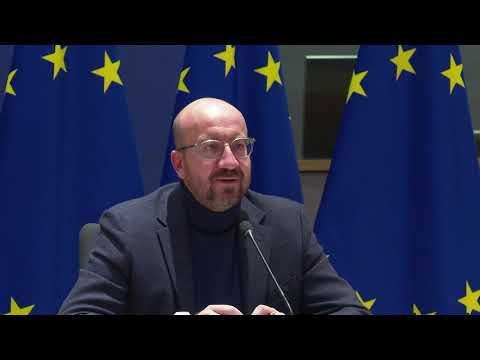 Charles MICHEL, President of the European Council, meets via video conference with the Executive Council of the American Chamber of Commerce to the EU...