The Republic of Ireland occupies most of the island of Ireland, off the coast of England and Wales. Its capital, Dublin, is the birthplace of writers like Oscar Wilde, and home of Guinness beer. The 9th-century Book of Kells and other illustrated manuscripts are on show in Dublin’s Trinity College Library. Dubbed the "Emerald Isle” for its lush landscape, the country is dotted with castles like medieval Cahir Castle. Ireland's rich culture, enchanting green landscapes and friendly locals are just a few reasons why so many travelers make the journey to this island country.


Number 10. Sligo
This pretty town is only a two-and-a-half-hour drive from Dublin. And what a drive it is. From the crashing Atlantic Ocean to the majestic mountains, sparkling lakes, and lush fields, there are plenty of natural wonders to gape at in this lovely spot.


Number 9. Clifden
A small city, Clifden certainly packs in a ton of beauty. Nestled quietly within the Twelve Bens Mountains and beside the mouth of Clifden Bay, you'll be hard-pressed to find a more breathtaking town. Tall church steeples are dwarfed by towering mountain peaks while colorful buildings pop against nature's lush green backdrop. Stone walkways line the serene River Owenglin, which runs through the center of town.


Number 8. Tralee
Another example of old world meets modern day, Tralee boasts historic Georgian homes interlaced with contemporary buildings and concrete piazzas. Perhaps best known for its annual Rose of Tralee International Festival, Tralee is short on tourists at other times of the year, but big on charm. One of the most popular tourist destinations in Tralee is the Kerry County Museum, which includes life-sized dioramas that bring life in the 20th century to the forefront of our modern day culture.


Number 7. Dingle
Jutting into Dingle Bay, on the spectacular Dingle Peninsula, is one of the quaintest fishing towns you'll ever come across. It features hilly, narrow lanes lined by quirky shops and farm-to-table restaurants. Dingle also boasts a picturesque lighthouse, a medieval stone tower dating back to 1847, and brightly painted buildings favored by other charming cities like Kinsale. For a small city, Dingle offers plenty of fun and interesting things to do. What this town is best known for, though, is its more natural surroundings.


Number 6. Kinsale
If you like to eat, you'll love Kinsale. Known as the "Gourmet capital of Ireland," this small city has a motto that gastronomes will truly appreciate. Every October, this tasty town highlights its delicious fare in the annual Kinsale Gourmet festival. If you can't make it to this popular festivity, be sure to check out as many restaurants as you can during your stay.


Number 5. Cork
There aren't many places that boast a museum dedicated to butter. Nor are there a lot of cities that welcome you as warmly as Cork. The second largest city in the Republic of Ireland, Cork is arguably one of the most cosmopolitan. As a result, you'll find all types of gastronomic delights, as well as diverse art galleries, interesting shops, and unique museums.


Number 4. Limerick
Deemed Ireland's first "Irish City of Culture," Limerick is a city with grit, and a lot of new found glitz. You'll find an updated waterfront and the bustling Newtown Pery Quarter, which boasts shops and restaurants able to compete with those in any booming metropolis.


Number 3. Belfast
Northern Ireland's most famous gem, Belfast was once a place best avoided. Violent clashes between Catholics and Protestants marred the city's image and created segregated areas of town.
It's impossible to ignore the city's remarkable redevelopment, which began wholeheartedly after the Good Friday Agreement (circa 1998). Areas such as the Cathedral Quarter and Victoria Square have been rejuvenated.


Number 2. Galway
Galway is teeming with life. Around every corner of this eclectic city lies music, art, or colorful buildings to immediately brighten your spirit. The city's bohemian vibe is unmistakable, and it lies in stark contrast to Galway's iconic elements such as the historic medieval town walls and striking stone bridges that cross the River Corrib. When it comes to food, Galway is an up-and-coming gastronomical superstar.


Number 1. Dublin
Ireland's capital should be the first stop on every traveler's list. Cobblestone streets abound, adding to the city's charm, but most visitors revel in Dublin's vast and storied history. Its museums are top notch. The Kilmainham Gaol, for instance, offers a unique and intimate look at the country's struggle for independence. Ireland's largest metropolis, Dublin is also its most diverse.


Which city you liked the most comment down below. 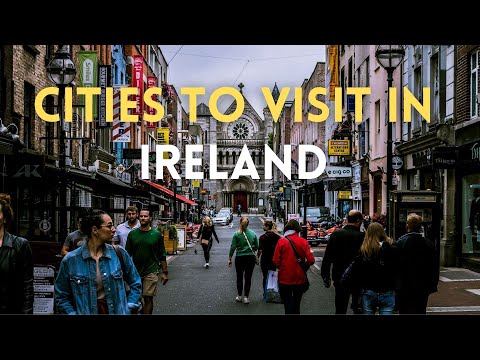